A fun way to get to know your members is to play a Japanese game called Sugoroku. We also included the Japanese version of rock-scissors-paper, janken, so your anime club members don’t scramble around looking for their dice.

Sugoroku, which translates to “child’s dice game” or “Japanese backgammon”, is a game similar to American board games. Players usually throw dice and move around a board. Because we’re short on dice, we are using janken or rock-scissors-paper to decide who gets to move to the next boxes.

❶ Play janken, or rock-paper-scissors.  Winner will be A. Loser will be B.

❷ A (Winner) will ask B (Loser) the question.

❸ B (Loser) will answer the question and sign their name on A’s paper.

❹ A (Winner) can move to the next box/question. Sorry, B, try again! 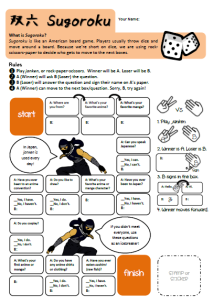 There are 2 formats available for this game.